Mi Young’s Farm has quickly become one of my favorites at the Santa Fe Farmers Market, where they’ve been a vendor since 2012. A husband-and-wife outfit producing a variety of greens, their kimchi is particularly (and addictively) good—something I never thought I’d say about fermented cabbage salad. Kimchi is a Korean staple made from napa cabbage, radishes, garlic, chili and spices, usually made according to a mutable recipe passed down through generations. Mi Young’s comes from Seoul-born owner Jenn Yi-Mushen’s family. The stand offers a variety of flavors of kimchi pancakes at the farmers market, all wrapped up with organic mung beans and a thin, flat pancake made from organic brown rice flour.

My favorite from Mi Young’s? The breakfast special with fresh greens, a fried egg and plain chevre for $10; although the red mesa, which comes with bulgogi (Korean-style barbecue beef made from local, grass-fed meat) for $12 is also very good.

Mi Young’s is a micro farm situated near Pojoaque on 5 acres, 2 of which are arable. Micro farms are a smart alternative to the large, industrial-sized giants that generate the kinds of produce consumers are accustomed to seeing in grocery stores. And though industrial farming does have numerous benefits—which include yielding affordable, nutritious food available to people who might not otherwise have access to such offerings year-round—it also typically employs methods that are wildly unsustainable, such as dreaded GMOs and the accompanying pesticides and fertilizers. That’s not even mentioning industrial use of fossil-fueled farm equipment and transportation of goods.

Small-scale agriculture can’t feed the hungry in the same way, but acknowledges the finite limits of our land and resources, relying on a model of self-sufficiency. Additionally, small-scale operations often produce the most unique types of groceries by prioritizing the health of the land and soil. Why does the best green chile come from Hatch, and the best red from Chimayó, if not that the dirt they’re grown in doesn’t exist anywhere else?

The farmhouse at Mi Young’s is built out of traditional adobe that co-owner Will Mushen crafted out of small bricks of mud and straw. Mushen tells me that since there is a historical precedent and protection for adobe construction in New Mexico, it is easier to build alternative housing out of natural materials here than in other states. Thus he also has constructed three small walipinis out of the same mud. These are underground, earth-based greenhouses which, when aligned properly with the sun, are naturally thermo-regulating, even in winter. In the case of Mi Young’s, it makes for a greenhouse wherein plants can practically be grown out of the walls. In addition to the napa cabbage for kimchi, the farm grows cold-weather salad greens such as kale and mizuna.

Mushen embraces a Taoist approach to farming. “Most farmers, if they find a rock in their field they can’t move, they’ll borrow a machine and move the rock,” he says. “But I believe in seeing the positive—what are the different microclimates the rock creates? There’s sun on the south side and shade on the north side, and protection from the wind on the leeward side. It’s an opportunity to grow something you couldn’t before.”

As for Mi Young’s kimchi, it’s available in Santa Fe at the Cheesemongers of Santa Fe, Barrio Brinery, Skarsgard CSA and, of course, the farmers market. Two sizes are available: a pint for $10 or a quart for $18. You can get it in mild, traditional, vegan and extra-spicy, and seasonally there are daikon and cucumber varieties. I picked up the vegan entry and found an accurate replica of the real thing. With a fish sauce-free base made out of napa cabbage and daikon radish, I promptly undid the vegan-ness at home by throwing the kimchi in a skillet with some macaroni and cheese decadence. This was so satisfyingly creamy and spicy I can’t wait to make it again. 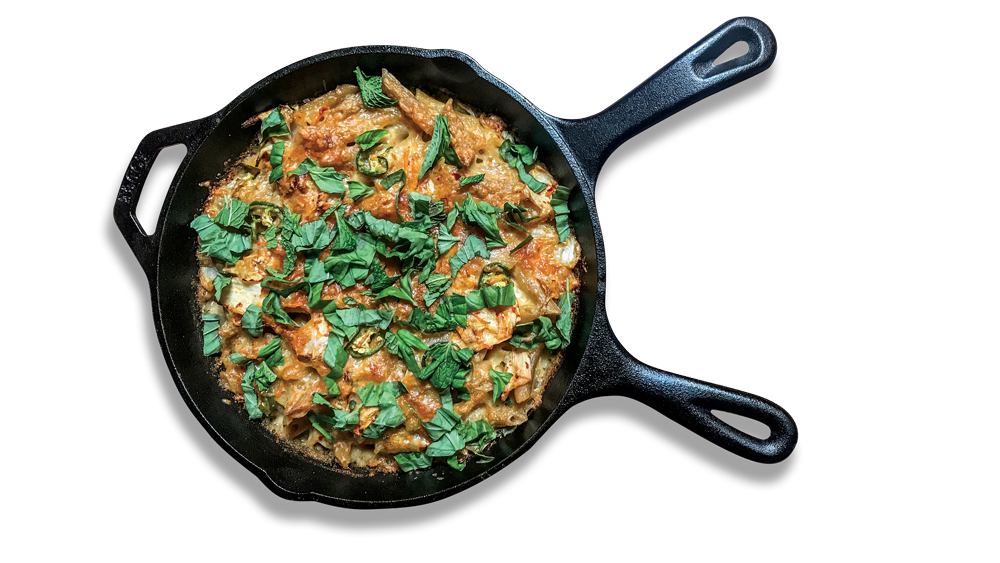