A group of more than two dozen New Mexico prison inmates, many with compromised immune systems, are considering legal claims against the state Corrections Department for its "gross negligence and deliberate indifference to the dangers of COVID-19," according to documents obtained by SFR and New Mexico In Depth.

As the rest of New Mexico remains under an order against gatherings of over 50 people and pleas from officials to practice social distancing, the state's prison system has not tested any of the thousands of inmates locked up or the corrections officers guarding them. And there do not appear to be contingency plans in place should an outbreak occur.

Parrish Collins, an Albuquerque-based attorney who specializes in civil rights, visited clients at the Central New Mexico Correctional Facility in Los Lunas on March 9, he wrote in a notice sent to Gov. Michelle Lujan Grisham and corrections officials four days later. An officer told him the minimum-security lockup "was taking no precautions against coronavirus."

"It was indicated that it was not a serious threat and there was nothing to worry about," Collins wrote in the notice.

"I've talked to several inmates since then, and they're getting really nervous about corona," he said in an interview Tuesday. "Corrections' response so far seems to have been minimal — they're just restricting visits. Beyond that, there seems to be no testing and no plan for when this gets really bad. We are going to protect our clients."

The tort claims notice Collins filed last week — essentially an intent to sue letter — underscores the perilous position in which jail and prison inmates find themselves around New Mexico and the nation as all corners of society brace against the spread of COVID-19.

Health experts say people with damaged immune systems are particularly at risk. Collins said many of the 27 clients mentioned in his notice have hepatitis C, diabetes or other conditions that have weakened their immunities.

Collins' action represents people who are locked up in prisons around the state, mostly the Penitentiary of New Mexico in Santa Fe, the prison in Los Lunas and the Northwest New Mexico Correctional Center in Grants, Collins said.

"It's really concerning because jails and prisons are hotbeds of infection: the closed quarters, the lack of ventilation, no hand sanitizer," he said in the interview. "It's almost impossible to social distance, and so our clients are in very vulnerable situations because the prisons do not have the capability even on their best day of treating an epidemic." 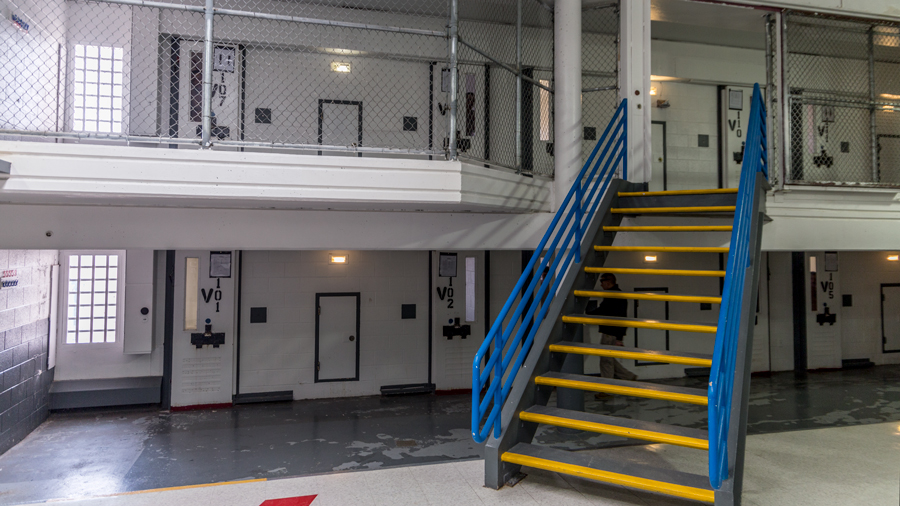 He represents many of those 27 people in ongoing lawsuits against the Corrections Department and its past medical providers. New claims could include Wexford Health, which has a contract for medical services in the prisons, alleging negligence and inadequate care.

Wexford did not respond to a request for comment on Collins' new claims, but a spokesman for the department said the attorney's visit to the Los Lunas prison came before New Mexico's first confirmed COVID-19 infection.

"Upon the confirmation of cases in New Mexico, we immediately took action," Harrison said, pointing to measures since last week, including eliminating all "contact visitation" at state prisons, even for attorneys and family members, to prevent the disease from spreading.

Since then, however, not a single inmate or staff member has been tested, and the Corrections Department does not appear to have a contingency plan in place should coronavirus spread through a prison.

Officials at the state's 11 prisons are informing inmates about the virus, Harrison said. The state Health Department would conduct inmate tests "if our medical provider deems it necessary," he said, and Corrections is "diligently informing our staff of COVID-19 symptoms and signs."

Harrison said Corrections officials are discussing the possibility of "screening" — but not testing — all staff members before they begin their shifts.

Collins said he expects to amend several of the existing lawsuits, which predate the COVID-19 outbreak, to include claims about what he calls Corrections' failure to prepare for and protect people against the virus.

Collins, in his notice, asked the department to preserve a host of records, including all communications related to its "preparation, planning and execution of coronavirus protections within any and all NMCD facilities."

In the interview, he connected prisons to their larger communities as the public health crisis surrounding COVID-19 grows. Corrections officers, he said, should be tested along with inmates. That's because the guards are around more people than those who are locked up — and limiting person-to-person contact is the primary recommendation from health and government officials to slow the virus' spread.

"The guards need to be protected, too," Collins said. "They are out in the community, and they are likely being exposed to corona both inside the prisons and out. Honestly, we sent out this notice of tort claim so that, hopefully, the state will take action. And I hope that the public will see that this situation could impact them and their own safety. Just judging by the science behind this, it's almost certain that people have already brought this thing into the prisons, and it's going to get bad."

COVID-19 updates from around the NM criminal justice system

Santa Fe County officials are awaiting the results of the first COVID-19 test conducted in their jail.

Authorities arrested a man in Albuquerque over the weekend who was wanted on a U.S. Marshals Service warrant, Santa Fe Warden Derek Williams said in an interview. The man had been in California and, under a contract the county has, he was booked into the jail about 15 miles from the capitol.

Not long after his arrival, the man showed signs of a possible COVID-19 infection, the warden said. He was immediately moved into what jail officials are calling the "quarantine pod" — an area inside the jail with a dozen cells designated for anyone with symptoms of the virus.

Jail officials have designated a separate area of the jail as the "intake pod," he said in the interview. That's where all newly arriving inmates will spend their first 14 days in the lockup. There, authorities will monitor them for coronavirus symptoms. Those who appear sick will be moved to the quarantine pod.

Williams said the intake pod can hold up to 96 inmates; about 20 people are booked into the jail every 24 hours, with roughly half of those entering the general population before their release. The jail's total capacity is about 600. 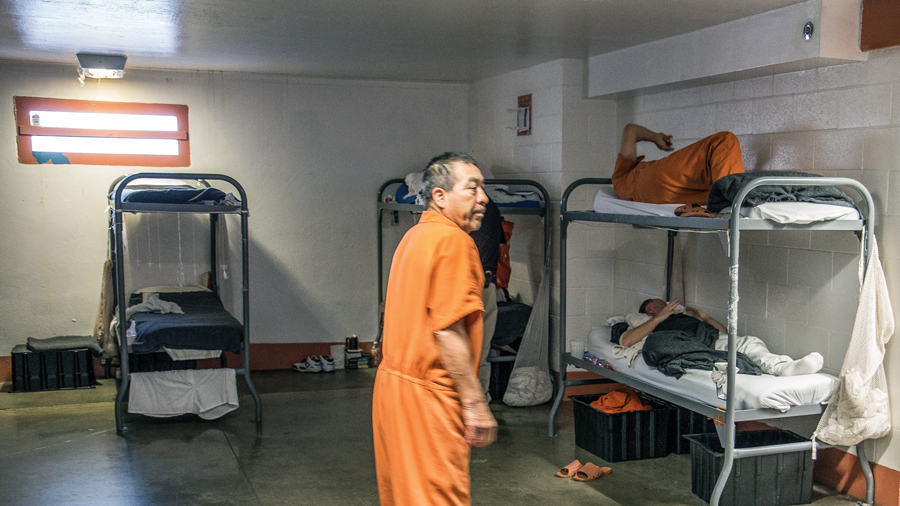 The Delta cells blocks of the county jail are structured like a dormitory.

Like the state prison system, Santa Fe County has suspended in-person visits to the jail through April.

It's not a perfect system, Williams said, acknowledging that the situation with the virus is changing nearly every hour.

At Bernalillo County's Metropolitan Detention Center, the state's largest county jail, officials have received a negative result for the first of their inmates tested for COVID-19. The inmate appeared sick and was sent to an area hospital, where doctors decided to conduct a test for the virus.

The inmate was sent back to the jail after the result came back negative, county spokesman Larry Gallegos said, adding that the jail continues to "screen" — but not test — all inmates for risk factors and symptoms.

Meanwhile, the New Mexico Criminal Defense Lawyers Association has joined the public defenders office in asking the state Supreme Court to release some people accused of nonviolent offenses from jail — and to delay trials and cancel hearings in a host of cases.

Richard Pugh, the association's president, sent a letter to justices on Monday saying "the population we serve are the most at risk because of their poverty and medical frailty, and if we don't act to protect them, they and the rest of the community will be at increased risk."

The association also is calling for a moratorium on arrests and detentions for people suspected of non-violent offenses, failure to pay fines and fees, minor probation and parole violations and "other alleged violations which do not threaten public safety."

Some prosecutors around the state have signaled that they agree with some of what the defense attorneys have requested — namely a blanket continuance for criminal and civil cases, especially jury trial settings.

The Supreme Court has taken some steps, including on Tuesday when the justices suspended jury trials in criminal cases. (They had previously taken that action for civil cases.)

But it does not appear ready for the more drastic actions defense attorneys are seeking.

Courthouses around the state remain open, although the justices have limited the number of people in courtrooms, hallways and other locations to 25. Judges are allowing video and telephonic hearings and conferences when possible, too.

"Especially during a public health emergency, courts must not close because they deliver vital services required in our justice system to ensure community safety," state Chief Justice Judith Nakamura said in a prepared statement.

The defense lawyers raised another concern — about public perception — in their letter to the Supreme Court.

"The current discussion is primarily focused on minimizing spread of the disease among court workers and criminal justice staff," Pugh's letter says. "Little is being said to address the rights of defendants waiting for their day in court."

The longtime public defender also hinted that the narrative coming out of some of the state's jails and prisons could create unsafe conditions beyond a possible spread of the virus.

"We have an additional concern that jails are misinforming the public about implementing testing for Covid-19," he wrote. "Recent press releases from our county facilities imply stringent testing for the virus is taking place. This simply is not true. Those who are arrested, or who are currently incarcerated know that Covid-19 testing is not happening within the jails or upon arrest. Without overt action taken to reassure the incarcerated population NMCDLA is concerned about the possibility of social unrest in our jails such as recently seen in Italy."

This story was co-published with New Mexico In Depth, a SFR partner

Editor's note: This story has been updated with remarks from New Mexico Chief Justice Judith Nakamura.

Santa Fe Claims Progress, But No Resolution on Unfinished Audit