Officials in Santa Fe this week gathered to tout the successes of the city's Law Enforcement Assisted Diversion (LEAD) program, including a drop in arrests and a reduction in drug use among participants.

The program, now in its fourth year, is spearheaded by the Drug Policy Alliance and diverts people caught committing nonviolent crimes toward social and mental health services instead of being locked up in jail and prosecuted in court. Similar programs are in place or development in 30 cities and counties across the country, according to Santa Fe LEAD. Since its launch in Santa Fe, 177 people have been diverted from arrest and prosecution and into treatment.

According to an analysis by the New Mexico Sentencing Commission in partnership with the University of New Mexico, the average rate of arrest for 76 individuals who participated in LEAD dropped 30 percent in their first six months post-diversion compared to the previous six months before entering LEAD. There was also a 13 percent drop in emergency medical service calls among participants.

The results were uneven, however; those who remained most engaged with the program had the fewest post-diversion arrests after the initial six month period.  But none of the people included in the study were arrested for violent crimes following their participation in the LEAD program. Emily Kaltenbach, New Mexico state director for the Drug Policy Alliance, said public agencies saved thousands of dollars per LEAD participant because of reduced jailing and health care costs. 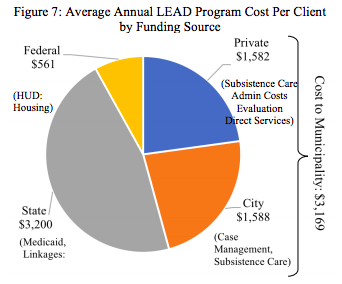 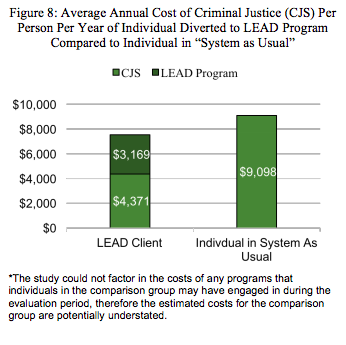 The results, said Serna, are inspiring counterparts in Española and Rio Arriba County County to assemble their own version of LEAD. Last year, former Santa Fe Police Chief Patrick Gallagher said he intended to shepherd the program in his new job as Las Cruces top cop.

"We identified [that] we need more engagement with participants because [with] more engagement we are seeing less recidivism with nonviolent drug offenses," Serna said at a news conference outside City Hall. "We can't incarcerate our way out of the opioid epidemic."

Webber praised reframing of drug use from crime to a safety and health issue. He all but confirmed that LEAD would continue to have a presence in Santa Fe.

"The data are telling a very good story, it is a story of policy that is the right way to look at a problem," Webber said. "We all know if you ask the wrong question or start with the wrong policy, you'll end up with the wrong answer and the wrong result."

The program in practice is led by police and prosecutors, who determine from the start who can enter it. Social service providers are there to offer programming and assistance. The only way somebody can attain the menu of services offered by LEAD is if police refer them to the program.

Police Chief Padilla said that "the social referral" aspect of the program "was something [SFPD] truly wants to focus on."

"We are those true community caretakers, we want to get out there, interact and let them know we're there to help them," Padilla continued. "We want to assist them through counseling, career paths, getting back to this community and surrounding communities of Santa Fe."

The results of the Santa Fe program, modeled after Seattle's LEAD, will likely have an impact on its reach nationally. With positive results reported in both cities, the DPA now has more leverage to lobby the US Department of Justice to fund the program's expansion.

At a previous gathering in January to discuss preliminary results of the program, state employee Denise Herrera said LEAD was the only thing that helped her son maintain sobriety after 13 years of unsuccessful rehab stints in several states.

“I’m forever thankful for LEAD and all staff who’ve made this drastic change, not just for my son’s life,” Herrera said, concluding that her son wouldn’t be alive without the program.

Some academics who focus on overpolicing have criticized LEAD for placing law enforcement in the driver’s seat of a public health issue. Alex Vitale, a professor of sociology at Brooklyn College, says LEAD is “one of those reforms that doesn’t really get to the heart of the matter.”

“Why is it that the police are turned to as the only people who could possibly sort out who the people who need help are?” Vitale tells SFR. He argued that LEAD is part of a larger political and cultural tendency that encourages police to take on greater roles in civil society.

Kaltenbach, of the the New Mexico DPA, responded that LEAD is a step toward decriminalization, and isn’t intended to be a final solution for addiction-related crimes.

“In my opinion, if LEAD is still the model in 20 years, we will have failed,” Kaltenbach tells SFR. “Right now we don’t have any alternatives, so we’d rather have people diverted pre-arrest into social services and support instead of going through the criminal justice system and having a felony on their record for life.”

COVID-19 Plateaus in NM as DOH Amps Up Monkeypox Response