In her most recent novel, The Year of the Flood, Margaret Atwood describes a future in which humanity has all but obliterated itself through scientific hubris and indifference to the environment. It is a Hobbesian world described through two female protagonists whose overlapping histories with the idealistic eco-group God's Gardeners culminate in a gripping meditation on human nature. Atwood has written more than 40 novels, essays and poems in a career that has garnered her numerous literary accolades, including the Man Booker Prize for The Blind Assassin. She and partner Graeme Gibson, author of The Bedside Book of Beasts, visit Santa Fe for a book event and fundraiser for WildEarth Guardians and Wild Watershed, sponsored by Garcia Street Books. SFR spoke with Atwood by phone from her hotel room in Chicago.

SFR: Your newest novel is a companion to a previous one, Oryx and Crake. Did you plan that?
MA: No, I did not. About two minutes after I finished [Oryx and Crake] and certainly about two minutes after [it] was published, everybody started saying, 'What happens two minutes after the end of the book?' The other problem was, having been asked for years and years, 'How come you write so much from the point of view of women?' as soon as I wrote from the point of view of a man, they all started asking, 'Why did you write from the point of view of a man?' The other part was filling in the grid…We didn't really know what was going on in the pleeblands and we didn't know what was going on inside the God's Gardeners, so I thought it would be interesting to find out.

Ursula Le Guin recently wrote about the novel in The Guardian and seemed inconsolable to the idea that you're not writing science fiction.
OK, let's deal with this. I'm actually doing the [Richard] Ellmann Lectures [at Emory University] on the subject. If you look at some of the things I've written, including a long review of Ursula Le Guin herself, in the New York Review of Books, and my introduction of the Island of Dr. Moreau [by HG Wells] and my intro to Brave New World [by Aldous Huxley] and Rider Haggard's book, She, I've been poking around in that large area and I like to use terms precisely…We could say that the DNA of fantasy descends through fairy tales, through George MacDonald, through Lord of the Rings, CS Lewis' Narnia books and Conan the Barbarian and weird tales and things like that…and you could say that Brave New World and 1984 [by George Orwell] descend through Jules Verne, who was writing in the 19th century, things like 20,000 Leagues Under the Sea, things he thought might actually happen…so the two main strands are things that are not going to happen, such as Martians arriving in big giant tin cans and coming out and drinking people's blood through straws…and things that really are conceivable, that would be Brave New World, 1984 etc., Riddley Walker, Russell Hoban's book. Mine is the second kind.

Some people think you're prophetic.
I know, but I'm not.

The heroine in Bodily Harm, Rennie Wilford, is considered prophetic by her colleagues. She disagrees and says, 'I see into the present, that's all.'
Yes, that's right. That is what people who are credited with being prophetic are actually doing: They are seeing into the present.

But there are no sacred cows in your work, it's about abuse of power.
That's right. The God's Gardeners are not in a position to abuse power because they are small. We don't know what they would be like if they actually got into power. If you follow the history, for instance, of religious groups that start small and then get power, they generally follow the paths of power.

In a 1970s interview with Graeme Gibson, he asked you about a scene in The Edible Women, and you responded that any time one acts, one is exercising power; that if there are only killers and victims, from a survival point of view, it's preferable to be a killer, even if it's morally preferable to be a victim. I was thinking about that as I was reading The Year of the Flood, those were the choices. Although I guess Ren survives almost by luck.
You could be a lucky person. You can be a killer, a victim or a lucky person, so I've expanded my categories. But when push comes to shove, what does Toby do?

Kill…You've drawn parallels in the past between gender and national politics. You wrote an essay in 1987 opposing the Canada-US Free Trade Agreement.
And was I right?

You were absolutely right, but we won't say you were prophetic. You made a funny comparison in which you compared US dominance over Canada to male dominance over women.
Yes, that annoys people. It annoyed Canadian politicians.

Because you said they were in the missionary position and not on top. The victimization of women occurs in The Year of the Flood, but unlike The Handmaid's Tale, America as villain seems less prominent than global corporate villainy. Because America itself has had its own slippages?
Yes, it's in trouble. I don't know whether you've noticed. It's had its slippages and, like every other place on the planet, it is suffering from decline of available foodstuffs and climate change disaster.

Is there also reason to feel optimistic given the changes people are making, the so-called green lifestyle movement?
I can't pick up a magazine without finding a big green spread…this kind of thinking is now front and center, whereas five years ago it was in the back pages of nerdy publications, and that in itself is huge.

What sort of changes have you made?
Last year we replaced all of the windows in our house. We have been doing the low-energy lightbulbs ever since they happened. We don't have air conditioning, anyway. We open the bottom windows at night, we open the skylight, the air flows through; it works 99 percent of the time. We have the virtuous cars, we do the local organic shopping, all the things you can probably think of. But the most important thing is the shade-grown organic coffee. Coffee is the second most traded substance on the planet after oil, and the non-organic, non-shade-grown is a big killer of migratory songbirds, because their habitat is destroyed and then their food and [they themselves are] sprayed with pesticides. So being heavily involved in the bird world, I can tell you that what's killing them now is going to kill us later. So the shade-grown organic coffee, if you can get one message out, if people would do that, it would be a huge major change. [Atwood then recommended reading the book Silence of the Songbirds: How We Are Losing the World's Songbirds and What We Can Do to Save Them by Bridget Stutchbury.]

There's some very dark science and genetic engineering—although extremely entertaining, obviously—in both Oryx and Crake and The Year of the Flood. Is it a warning against people using science to play, for lack of a better word, God?
There are active groups right now who think it would be a great idea for you to be able to design a baby, the book on that is called Enough [Staying Human in an Engineered Age] by Bill McKibben. What I say to my genetic engineering people when I go to speak to them is, 'It's a tool and what we choose to use that tool for is up to us, the human beings, not to the tool itself.' So if we can use it to make drought-resistant crops, make crops that don't have to be sown every year, fantastic. If what you want to do is become immortal or design a baby, the fallout is going to be awful.

I'm curious as to your take on the 2012 Mayan apocalypse phenomenon.
It's a problem with human grammar. Once you have a past that infinitely recedes, you have to come to a beginning, which is arbitrary and once you have a future that infinitely recedes…we don't seem to be able to resist that. There's a very good writer called John Gray [Black Mass: Apocalyptic Religion and the Death of Utopia], you might look him up…he's writing about that mind-set that seems to push us toward having us end and then begin again. Any narrative need is pushed by grammar. There are some cultures that exist more or less in the present tense, and they don't seem to have that, 'in the beginning was…' fill in the blank, 'but then something better will come along, and it will be called…' supply the answer. But it does lead to very bad political systems, that kind of thinking. Hitler's favorite opera was one in which everything burns down in the end…that feeling that you need to knock everything down to build a perfect world.

At the end of The Year of the Flood, Jimmy, Ren, Amanda and Toby hear music and see people with torches coming through the forest. Jimmy says, 'Here we go again.' I read this as a happy ending because, despite all the loss, people survive; the emotional part of humanity that Crake wanted to destroy can't be destroyed. Am I being a total sap here or is that part of what you wanted to convey?
No, I don't think you're being sappy…all of these books are really about human nature. How far can you stretch it before it's not human anymore? What are our essentials, what are our frills? 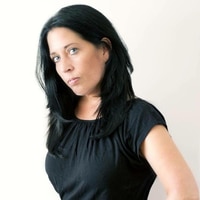