Leaders from New Mexico's major hospital said today during a news briefing they anticipate being ready to increase vaccinations when more supply becomes available—and they expect supply to increase as more vaccines come on the market, and as production of existing vaccines increases.

"The demand is so great," Christus St. Vincent Regional Medical Center Chief Medical Officer Dr. David Gonzales said, "the number of request we're getting for vaccine far exceeds the supply and once…the supply is there we'll all be busy."

Currently, Gonzales said, Christus is receiving approximately 975 doses each Monday, and vaccinated 600 people on Saturday and 10,000 people overall. Currently, he said, the hospital is focusing on second doses "until the supply becomes more readily available" and using the rest to vaccinate people 75 and older who are within the Christus health care system. With an eye toward the future, he said Christus is looking to hold mass vaccination events when the supply becomes available, with the possibility of working with partners to provide drive-up vaccination that could accommodate 3,000 people per week when supply becomes available.

Doctors from Presbyterian Health, University of New Mexico and Lovelace all echoed the sentiment that while demand currently outpaces supply, they expect more doses to become available and for their facilities to be able to scale up as they do.

The state received 59,500 doses this week, according to DOH Communications Director Matt Bieber, the same amount as last week. As of this afternoon, the state's vaccine dashboard reported that 340,047 doses have been administered, approximately 88,000 of which were booster shots.

"We know how stressful it is to wait while supply catches up with demand," Presbyterian Healthcare Services Medical Director Dr. Denise Gonzales said, also noting that New Mexico is "one of a few states leading the nation in vaccinations with more than 10% or our population receiving the first dose." Gonzales and others credited what she characterized as "an unprecedented collaboration between [the state health department] and all health care systems and  providers." 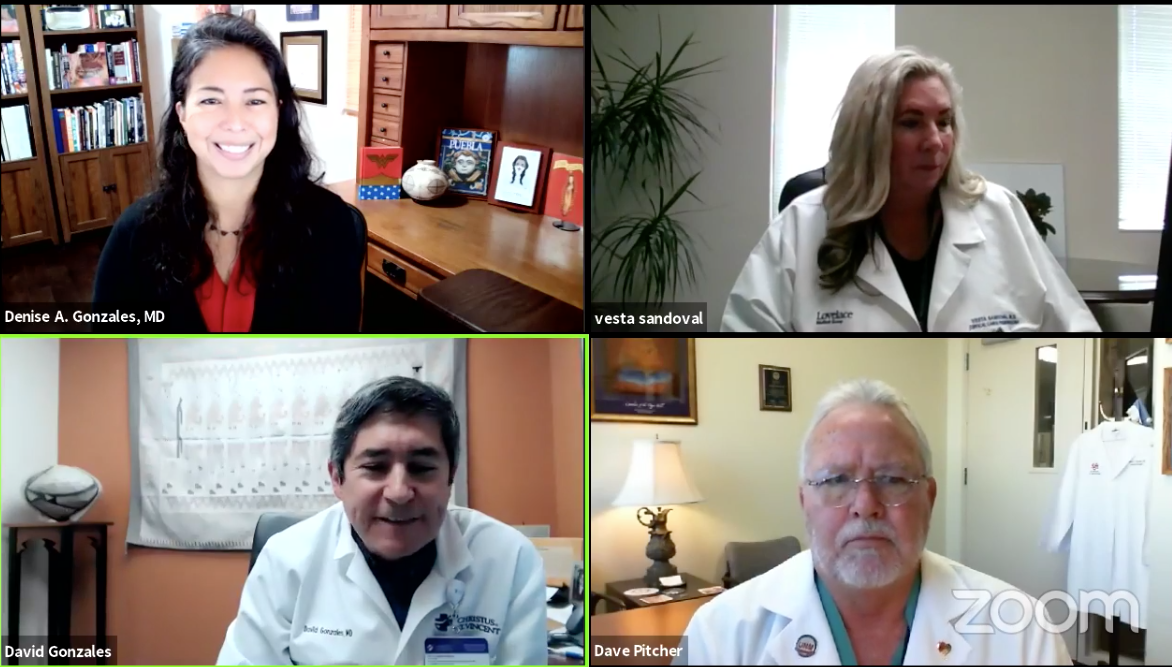 Gonzales also acknowledged reports of New Mexicans traveling to Texas to receive a vaccine, saying, “If you have the wherewithal to get vaccinated outside of the state, I don’t think any of us would ask anyone not to do that,” she said, but noted that New Mexico’s vaccination phases were designed to be equitable and ensure people at highest risk receive them first.

"We have one of the highest vaccination rates and we're doing it in an equitable way," she said. "We want to make sure we're vaccinating the right phase of people first. Although our neighbors may not have the same degree of coordination…I want to encourage people to please be patient and wait for us."

Moreover, UNM Health System Executive Physician Dr. David Pitcher said, one of the reasons New Mexico has been successful in administrating the vaccine has been because of the collaboration with the state. "If independent providers started to set up a separate parallel pathway, that would significantly disrupt the equitable distribution of vaccination and lead to a little bit of chaos," he said. "It's important we're doing so well in New Mexico precisely because we are collaborating and coordinating our efforts."

The health department today also announced that starting tomorrow it will be adjusting the way it reports county-level vaccination figures. On Friday, according to a news release, health department staff identified that the vaccination reports were pulling data based on where vaccinations were taking place versus New Mexicans' county of residence.

Starting tomorrow, Tuesday, Feb. 9, county-based data on the state's vaccination website will display vaccination totals based on county of residence.

"New Mexico's vaccination program is committed to rapid—and equitable— distribution," DOH Secretary-Designate Dr. Tracie Collins said in a statement. "So far, we're doing very well on both fronts—and today's announcement will ensure that New Mexicans have even more accurate information about where vaccinations are taking place around our state."

In terms of COVID-19, all the hospital leaders said they had seen decreasing numbers of patients, although their facilities remain full.

"The news is good currently, our numbers are still decreasing, which has led to decreased hospitalizations," Lovelace Chief Medical Officer Dr. Vesta Sandoval said. "However, we want to caution everyone to still be diligent. The virus is still out there and still puts everyone at risk."

New Mexico health officials today reported 315 new COVID-19 cases, bringing the statewide total so far to 177,867, of which the health department has designated 112,051 as recovered.

The state also announced 13 additional deaths, including a woman in her 90s from Santa Fe County. There have now been 124 deaths in Santa Fe County and 3,412 statewide.

The Department of Health has identified at least one positive COVID-19 case in residents and/or staff in the past 28 days at the following facilities:

According to a health department news release, previously reported numbers included two cases that have been identified as duplicates (one in Cibola County and one in Doña Ana County); as well as two cases have been determined to be out-of-state residents (one in Doña Ana County and one in McKinley County)— these have now been corrected. County totals are subject to change upon further investigation and determination of residency of individuals positive for COVID-19.

Cases among people being held by federal agencies