NM Gov: The Virus is Winning

Calling the spread of COVID-19 across New Mexico uncontrolled and the "most serious emergency" the state has ever faced, Gov. Michelle Lujan Grisham today detailed new restrictions effective tomorrow and warned more will come if numbers don't begin to come down.

"The virus is now winning," the governor said. "We are in uncharted waters."

Bernalillo County had 303 new cases, followed most closely by Doña Ana County with 89 and Chaves County with 37. Santa Fe County had 18 new cases today. More details on today's cases are available at the end of this story.

The state also announced one additional death, a female in her 70s from Luna County who was hospitalized and had underlying conditions. There have now been 922 fatalities.

As of today, 150 people are hospitalized with COVID-19, 21 of them on ventilators.* Hospitalizations have risen 74% so far this month. Indeed, both the governor and Human Services Secretary David Scrase said hospital beds are beginning to fill up across the state, including at Christus St. Vincent Regional Medical Center in Santa Fe.

• A 10 pm closing time nightly for any food or drink establishment that serves alcohol.

• People arriving from "higher-risk states" —or those with a test positivity rate exceeding 5% and a test positivity rate higher than 80 per 100,000 residents—can no longer be exempt from quarantine by testing negative for COVID-19 within 72 hours of arrival. The governor will amend her executive order so that all individuals arriving from those states—a list of which is updated each Wednesday at cv.nmhealth.org/travel-recommendations— must self-quarantine for a period of no less than 14 days or for the duration of their stay in New Mexico, whichever is shorter.

• Mass gatherings have been reduced from 10 to five people. 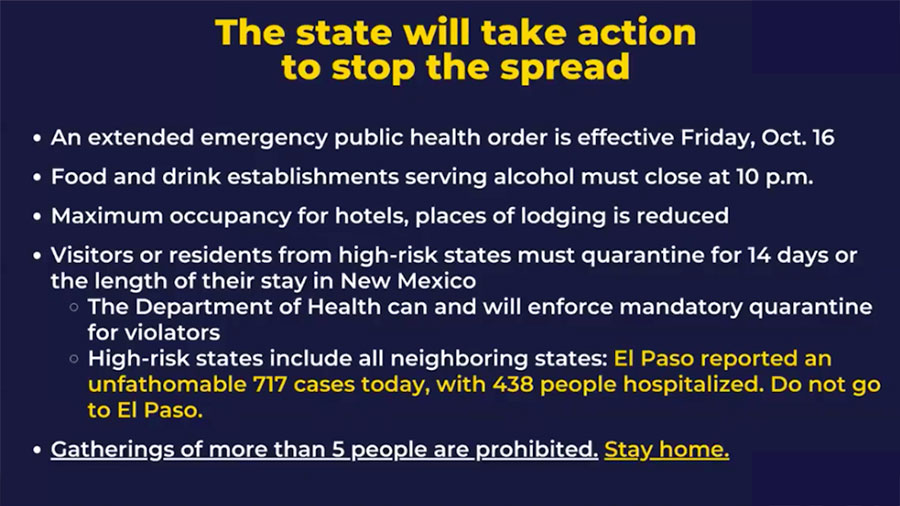 The governor urged residents to pair the new rules with a renewed vigilance toward hand-washing, mask-wearing and social-distancing. Speaking by Zoom from the governor's residence in Santa Fe, the governor said she was in her final day of self-isolation following the positive COVID-19 status of an employee at the residence. The governor and her fiancé have both tested negative twice, she said, but she intends to stay put.

"Given the state of emergency that I think we are in, I'm going to continue to self isolate," Lujan Grisham said. "I'm not going to be going out. What we're about to talk about today warrants those kinds of decisions and personal decisions by New Mexicans."

Human Services Secretary Scrase detailed the epidemiological curve the state has incurred of late, as cases continue to rise exponentially across all regions, indicated in the graph below. "We're like a car on ice," he said. "We can slam on the brakes today…but it's going to take two weeks for the car to stop."

The slide "keeping me awake," Scrase said, shows rising cases across all age groups, particularly in the 65 and older group, since that is the demographic most likely to be hospitalized.

Needless to say, with the rising case counts, the state is failing to meet three of its key gating criteria used to assess its efficacy in battling the pandemic. While the seven-day average for the state's test positivity rate was 5.18% on Oct. 13, the governor said today it is 8.1%, the highest it's been, she said.

"New Mexico had been leading the Southwest in low positivity rates, controllable transmission of COVID-19, and now we're in these columns, where we're leading the country…for uncontrollable spread," she said.

Scrase also reviewed some of the unknowns about the longer-term impacts of COVID-19, saying he's "often accused of trying to scare people. In my mind, I'm just showing you the data, I'm not wanting people to be afraid; I'm wanting everyone to be motivated to take action to double down, to be safe."

As for even stricter measures, such as re-instituting a ban on indoor dining, they could be coming.

"Given the activity and the mobility and the lack of public health efforts like mask wearing, the very real fear is that if we can't marry these new restrictions with the highest level of personal commitment, they will not be enough," Lujan Grisham said. "And we will know in short order. If they are not enough, as a state we have to be prepared to make tough decisions; I'm prepared to make another really tough decision. I don't want to make that decision. I want us to show that collectively we can use these tools and attack the virus right back."

Still, she noted, New Mexico "is past the point of just prevention…The wildfire is raging. Even with these numbers, I know we're going to have more people die and more hospitalizations."

The Department of Health has identified at least one positive COVID-19 case in residents and/or staff in the past 28 days at the following facilities:

According to a state news release, previously reported numbers included four cases that have been identified as duplicates (one in Doña Ana County, one in Eddy County, one in Otero County and one in Sandoval County); one case in Otero County that has since been identified as an inmate being held by federal agencies at the Otero County Prison Facility—these now have been corrected. County totals are subject to change upon further investigation and determination of residency of individuals positive for COVID-19.

Cases among people being held by federal agencies

COVID-19 Plateaus in NM as DOH Amps Up Monkeypox Response