From this week forward, Nov. 7 in Santa Fe will officially be known as Jason Silverman Day to highlight and celebrate the cultural contributions from the Center for Contemporary Arts’ Cinematheque Director, Jason Silverman. Mayor Alan Webber issued the proclamation at an event earlier this week.

"Jason has created programs for our region that have served more than 800,000 people, including festivals celebrating African, Latino and Native American culture, partnerships with dozens of our region's schools and organizations, and innovative education programs serving thousands of local students," the proclamation reads.

Perhaps most notably, Silverman directed and produced the award-winning 2015 documentary Sembene! about the life of activist-filmmaker Ousmane Sembene. He tells SFR he's indeed quite flattered, and that the honor coming from a community he loves so much is almost overwhelming, but there's much work to be done.

"Santa Fe is a very special place because it attracts interesting newcomers who are generally interested in something more than material gain," he says. "There are a lot of artists and deep thinkers that come here, and the city has to find ways to integrate this new energy with this generations-deep history."

Film seems as good a way as any, particularly given its cultural and artistic cachet and ability to connect people from different backgrounds. Cinema, as it stands, is one of the few art forms most everyone has in common. In Santa Fe, Silverman says, where traditions are innumerable and varying cultures come together, the opportunities to connect and educate through movies are nearly endless.

"There is a really interesting tension between the old and the new here in Santa Fe. There is an interesting tension between ethnicities and class issues. There is just a lot of richness in that friction," he explains. "Santa Fe is not as segregated as a lot of places in America, so there is opportunity for more interaction, and it makes for a really vibrant robust, and sometimes confusing culture—but it's real."

Silverman has also provided Santa Fe youths myriad opportunities to engage with film. In 2012, he implemented the CCA's Youth Partners Program, which provides discussion opportunities with community leaders about film. The CCA served approximately 1,600 kids last year, and Silverman says he anticipates this year to be even larger. Notable speakers thus far have included filmmakers like Mark Levinson, Michael Dax from Defenders of Wildlife and poet Jamie Figueroa.

"We bring schools to the theaters, and we have an educational library with really interesting films that feature real-life heroes as opposed to the superheroes you see at the Regal theaters," he says. "The guest speaker instructs the kids in groups so they can try to solve different problems."

Otherwise, it’s a matter of providing true cinema to the people of Santa Fe.

"The goal with the CCA and our cinema program has pretty much been the same for 15 years, and that's to give people a place to connect, have deep experiences and develop the want to do better and better," Silverman adds. "For my program, it's about growth, and the program has grown a lot."

"There's a dinner on Thursday night, so there's that, but I'll be helping my kid with his college applications." He says. "But to get recognized in Santa Fe which is one of the greatest cultural centers of the universe, by a city government that is trying to be in-tune with the community, is pretty deep." 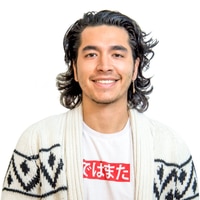