If there was ever a founding father who most exemplified that title in both look and manner, it might have been Israel’s first prime minister, David Ben-Gurion. The 2016 documentary Ben-Gurion, Epilogue, directed by Yariv Mozer (Snails in the Rain, Invisible Men) takes an illuminating look at one of the 20th century’s most influential leaders.

The film focuses on a six-hour interview conducted in 1968, 20 years after Israel declared its independence and five years after Ben-Gurion abruptly resigned from government work. Living in a small desert community, the squat 82-year-old would spend his days writing, going on long walks and shoveling manure. His living situation was so modest that the British film crew that conducted the interview constructed an elaborate library set in which to do it.

We’ll admit it—we had to pause and do a quick Wikipedia brush-up on the Israeli War of Independence and the Six-Day Day War while watching this film. Beyond the occasional news clip, Epilogue doesn’t give the viewer much context for some of the topics of conversation. The fact that interviewer Clinton Bailey was a young American Jew living in Israel limits the documentary; when Ben-Gurion says, “I believed we had a right to this country. Not taking away from others, but recreating it,” he goes predictably unchallenged.

Where it falls short in giving a multifaceted look at Israel’s foundation, Ben-Gurion, Epilogue succeeds as a portrait of its eponymous subject. The viewer becomes familiar with the man’s steady, religious thought process, and when the history lesson gets too heavy or monotonous, the film successfully switches gears to showcase some of Ben-Gurion’s quirkier qualities. He gleefully meets Einstein, takes a doctor’s advice and learns to stand on his head; he publicly disses telephones the day they arrive at his kibbutz.

Even if you’re not a history buff, Ben-Gurion, Epilogue‘s short run time makes it worth the watch. As part of the Santa Fe Jewish Film Festival, the documentary shows on Sunday Dec. 9 at 11am at The Screen (1600 St. Michael’s Drive). Ben-Gurion’s grandson, Alon Ben-Gurion, participates in a post-film discussion. 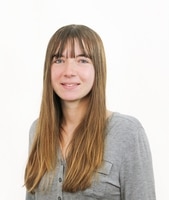 Sarah is a recent transplant who was born and raised in Oregon and earned a bachelor's degree in journalism and Spanish from the University of Oregon. She reports on local news and culture.