Since we love you, we spend copious amounts of time scouring the internet for information on food, and weirdly (or not, who cares?), we sometimes see certain trends emerge across various platforms. This time around, for whatever reason, it's canned food. Now, we know everybody exists at a different point on the food-fan spectrum, but as best as we can tell, the idea of canned foods being in the news of late might have something to do with certain international health concerns (promise we're not trying to freak anyone out). Something to do with preppers? Y'know, the people who hoard food and stuff for some unknowable future emergency? That's a whole thing for another day, but for the time being, we wanted to focus on canned foods and the strangely interesting history surrounding some of them. You're welcome, America (note, not everything is actual history—so don't write us so much as try to enjoy yourself for once).

It started here, with a USA Today story about the most popular canned foods in America. Think of it like a greatest hits of things you probably have in your pantry, from Swanson chicken broth and Ocean Spray cranberry…stuff, to various brands of tuna, beans, pork and beans, red sauces, ravioli, corn, tomatoes and, of course, emmer-effing Campbell's soups (probably because they're cheap to this day).

Speaking of Campbell's, the New Jersey company sells something like $8.1 billion a year because they're more than just soup. They own Snyder's (pretzels) and Emerald (nuts) and even Pop-Secret (popcorn). It dates back to 1869, when Joseph Campbell, then a maker of iceboxes, inherited a tin mine in Congo. The company opened its first factory in Camden, NJ that year. About 100 years later, Campbell's introduced the Chunky Soup line of canned soups. It only smells a little like dog food. Did you also know that the brand has been the official soup sponsor of the NFL since 1997? It's weird how a sport would be like "Eat a chunky-ass bowl of soup before running full-tilt into other huge dudes!" Then, for a long time, nothing happened (jay-kay, probably a lot did), but in 2019, some dork named Mark A. Clouse was named the 14th president of Campbell's Soup. Boom! History'd!

But let's turn back the clock, to prehistory or, at least, to a time a long, long time ago when humans were trying to figure out how to preserve food for later consumption. These suckers tried everything, from salting and fermenting to smoking and drying/jerky-fying. Cut to the late 1700s when the nation of France was like, "Sacre bleu! Something must be done about ze food going to ze army! She spoils! Spoils too fast, mon deu!" A massive prize of 12,000 francs was offered circa 1795 for whomever could crack the riddle, and it wasn't until a few years later when a chef from Champagne named Nicolas Appert called up Napoleon (who had since become emperor) and was like, "A-hoy-hoy, monsieur Bonaparte—let us put foods into Champagne bottles with combinations of lime and, for some reason, cheese." It worked pretty well, and by 1804, homeboy had developed the tin can, though steel was also a part of it and soldiers had to cut into those bad boys with bayonets that, luckily, they already had because they were soldiers. It took a lot of years, but he won that prize—and most of his work predated Louis Pasteur's 1864 bacterial findings and subsequent creation of pasteurization.

So then after that, our buddies at Campbell's really popularized the ol' tin can (snack choice of goats everywhere when an old boot isn't available) alongside companies like Borden and Heinz.

Speaking of Heinz, those tomato squeezers also date back to 1869 when a savvy young boulevardier by the name of HJ Heinz started selling sauces and pickles in the Pittsburgh area. Catsup was invented the following year with sweet pickles hitting the market in 1876. By 1901, Heinz was selling beans in cans, by 1908, every-dang-body every-dang-where had Heinz stuff in their homes and, by 2008, the company started selling the product as Heinz Beanz…with a "z" at the end. Not kidding.

Now let us turn to tuna, a popular canned fish that flared into popularity in the earlier part of the 1900s. See, in the late 1800s, the canned fish o' choice was the sardine, and San Diego, California, was, like, the epicenter of that jazz. Wouldn't you know it, though, people fished those little fishies to near-extinction, and the world was like "We're already down with fish in cans, what else you got?" Thus, in 1903, canner/fisher guy Alpert Halfhil was like, "A plan forms!" and then started stuffing albacore into sardine tins. Everyone loved it, we kept it going, introduced other kinds of tuna to the mix, killed about a bajillion dolphins and baffled Jessica Simpson with catchy slogans like "Chicken of the sea." We actually get where she's coming from, because our family always called chicken "tuna of the land."

Thanks for sticking with us this far, frenz, we'll only delve into one more—the Vienna Sausage, as small and horrifying a hot dog form as can be. We start with the etymology of the term "wiener," which, we learned, is German for Viennese. As in Austria? It's new? Maybe you've heard of it? Anyway, a butcher from Frankfurt (that should also give you some insight into yet another hot dog term) created those li'l hot dogs in 1903 because he wanted to can them for a longer shelf life. Thus, the sausages were sectioned into smaller bits, canned up and now have been sitting in your pantry since 1991.
Slogan idea:
"Vienna sausages: Your dad likes them."

We were around in the 1980s (or were we?!), but we don't remember this piece of high poetry coming to our TVs even at all.

¡UNEXPECTED LOCAL CONNECTION TO TIN CANS ALERT!
So you know how New Mexico is known for super-cool art pieces made in tin? Here's a little example. Anyway, turns out the way these works flared up into existence has its roots in the 1840s when US troops first started hanging around the region. Since Napoleon's buddy Appert had made sure soldiers everywhere had access to plenty of canned food, these suckers had more than enough tin cans to go around. So when they'd eat the food and discard the cans, New Mexican artisans would repurpose the materials into devotional art. Obviously it's an art form that has only grown since then to include a wide swath of subjects and representation, but since this whole canned food history turned out so much mroe interesting than we'd have ever dreamed, we just thought you should know. For a slightly deeper dive into the tale, check out this Chicago Tribune story, and if you're looking for local tin artisans, click the link in the second sentence above to learn more about artist Autry Macias, or look into Justin Gallegos Mayrant, a longtime SFR super-homie.

-You may recall we were just talking about local café Opuntia reopening soon, but you might not know that the new spot is four times larger and the owners want to do something ever more awesome than ever (while sticking to locally sourced food and, like, the best coffee and stuff). Thusly, they've kicked off an Indiegogo campaign (details here) wherein backers can get stuff like ongoing special breakfasts, the entire restaurant for you and 100 friends and other incentives.

-Meanwhile, in the old Opuntia space, new-ish eatery Cafecito is opening up for brunch on Sundays in addition to the regular things they do. That'll be from 9 am-2 pm. Cafecito also plans on hosting mate tea classes, the first of which is coming up on Sunday, March 8 from 10-11 am. Make sure you email them at cafe@trailheadsantafe.com to learn more and reserve a spot. As if that weren't enough, the restaurant is also helping to raise funds for Santa Fe's Theater Grottesco on April 1, and we hear they'll have info on how to lend a hand for that soon.

-We failed to mention last week that chef Fernando Olea of local hotspot Sazón is one of the semi-finalists for one of those James Beard Awards. Nice one, Fernando!

-Sadly, however, Sazón was not eligible for AAA Diamond rating this year (that's a thing AAA does to let you know what's fancy because we apparently live in a world where tow truck and tire companies call the food shots) due to the tragic fire that shut them down for some months. They're open again now, though, so should be back up there in no time. Other spots like Geronimo and Terra at Four Seasons are fully, full-on AAA Diamond-ed out in the Four Diamond tier.

-If you like chocolate and helping while consuming chocolate, the upcoming 7th Annual Chocolate Challenge to benefit La Familia Medical Center is a-brewing and a-appearing at the Eldorado Hotel on Saturday, March 14 at 6 pm. Local places like Arable, Jambo, the Eldorado itself and Social Kitchen+Bar will be there, will you? It's $90, but, like, it's for a good cause.

-Because God is dead and nothing feels right anymore, Dunkin’ (the official donut joint of whatever the hell state or region wants ’em) has released a new menu item called Snackin’ Bacon. It’s literally a little envelope with a few small pieces of bacon. Look at this nonsense: 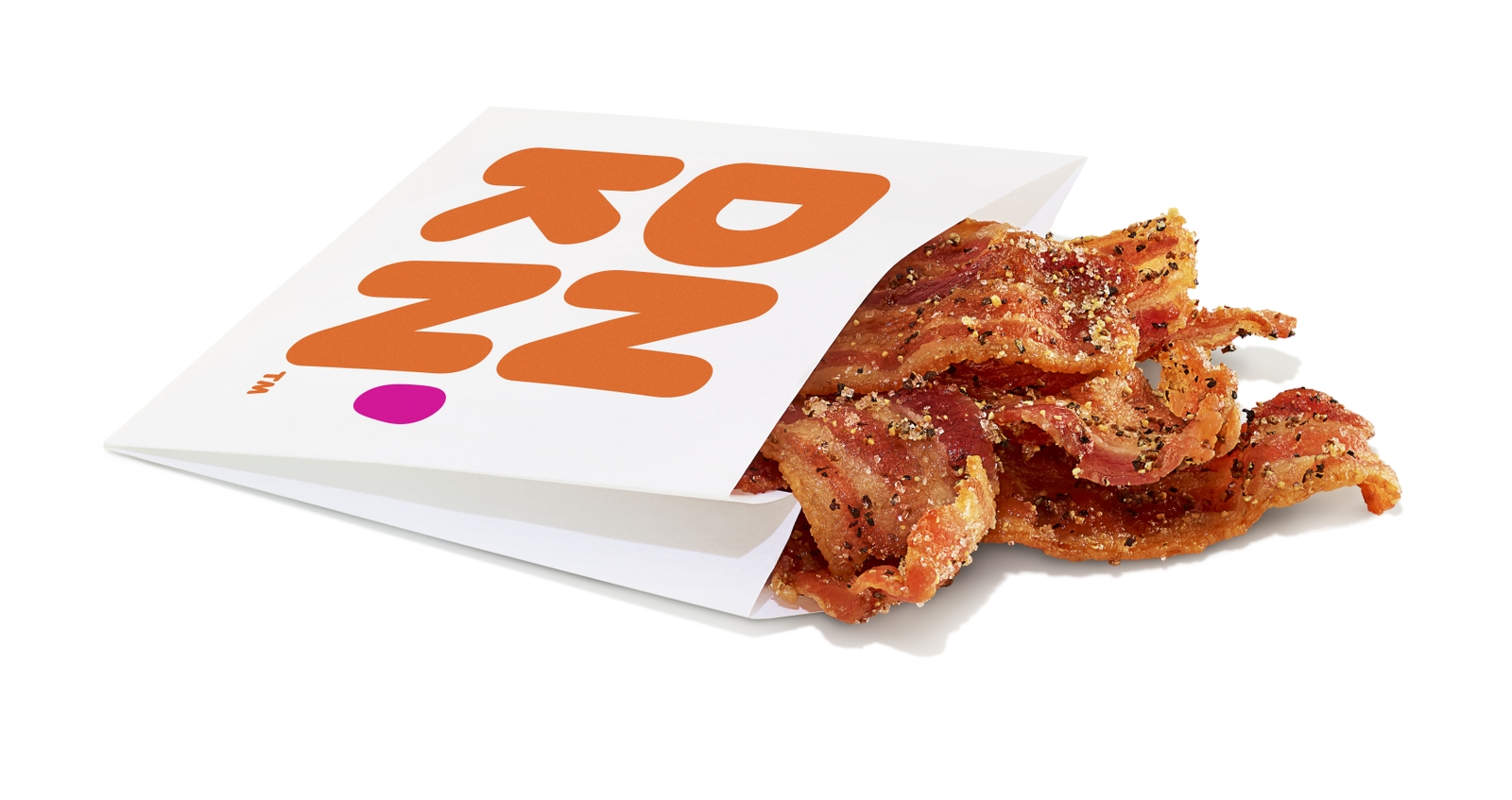 -Sadly also, Trader Joe’s founder Joe Coulombe recently died at 89. We’ll spill some frozen mozzarella sticks, wasabi peas and some kind of chocolate thing with some other thing inside of it onto the floor in remembrance of our dearly departed homie. In seriousness, for those of us who live life on a budget, Trader Joe’s is one of the easiest ways to stay sane (not counting the parking lot), and we appreciate Joe’s contributions to a world like this one.

-Michelin, the company you may recall us jabbing fun at in a section above this one, has a new award for sustainability, but there are people in the food world who aren't so down with its implications and execution. In fact, one chef in Copenhagen (that's in Denmark where sometimes things get rotten) says he was given the award with no audit of any kind—Michelin reportedly just called him and asked for a quote.

-In semi-related-to-canned-food news, bonappetit.com has tips for prepping should you be stuck at home for two weeks. We mention this because we know of a perfectly healthy local nerd who returned from a perfectly healthy time abroad and was informed that he'd need to self-isolate for two weeks because of virus fears—away from his family. The point is, you never know. And you should never go anywhere. And just, like, be careful whenever anyone loves you. We'd also point out that we had to navigate three popup windows on the Bon Appetit site before it let us get to the story.

-Lastly this week, someone we've never heard of, Becky G, eats sour candy and answers questions on the delish.com site. Why? We may never know. Who? Becky G, obvs. When? Right now. Where? In the inner recesses of our most horrible nightmares. We imagine the way we feel about this video is the way you feel when we talk about the history of canned foods for, like, a lot of words in a row.

Most Helpful Tip of the Week
“Have you been to the Sizzler?”
*There isn’t one in Santa Fe, and even if there were…