In 1918, Gunnison, CO was one of only a handful of communities worldwide that survived the Spanish Flu epidemic without a single case, while the world lost between 20 and 50 million human lives. "Gunnison declared a 'quarantine against all the world.' It erected barricades, sequestered visitors, arrested violators, closed schools and churches and banned parties and street gatherings, a de facto lockdown that lasted four months."  No one suffered from the flu, no one died.

102 years later, it has been quite a week here in our state.  We started on Monday with 2 coronavirus (COVID-19) cases and have ended with 17.  A series of bold policy decisions have been made, driven by our Governor Michelle Lujan Grisham, who has demanded that her Cabinet Secretaries do everything possible to protect the lives of New Mexicans.  In one week, decisions have included a declaration of a healthcare emergency, limiting large public gatherings, recommending self-isolation for two weeks after out of state travel and/or COVID-19 exposure, a strong push toward working from home, closing all of our state's public schools, and an order to nursing facilities to prohibit almost all visitors.

We both acknowledge that these changes create significant inconvenience for New Mexicans.  We will all make significant sacrifices in the coming weeks.  "I will have to stay home to care for my children, and miss work."  "I missed my daughter's basketball tournament because no spectators were allowed."  "I can't visit my husband with dementia in the nursing home."  Every one of these individual and collective challenges tears at our hearts.

At the same time, we know that these changes have the potential to save thousands of lives in our state.  As we inevitably move from having all of our cases this week be travel-related to the next phase of community spread causing a rapid increase in the number of cases, we believe that we have two basic options: 1) do nothing, and let the virus spread unimpeded though our state, as shown in the curve on the left in the graph below, or 2) implement aggressive, evidence-based approaches that have been shown to dramatically reduce community transmission, as shown by the flattened curve on the right with the Zia symbol.

The most important differences between the two curves are that aggressive and evidence-based social distancing interventions slow the spread of the virus in a manner that will NOT overwhelm our healthcare system.  Mortality rates are much higher when people do not have access to an effective healthcare system. 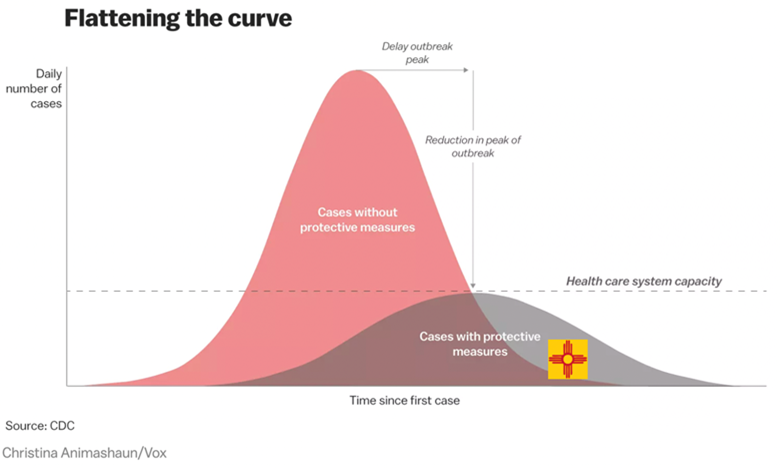 These differences are by no means small. Reductions in infection rates from comprehensive social distancing interventions have been studied and found to cause a 45% to 72% reduction in acute respiratory illness in households with school-aged children in Texas after the H1N1 influenza epidemic of 2009, to name one study.

As far as the major disruptions in life that these policy decisions may create, it turns out that parents are more concerned about the health of their children than the new inconveniences their families face.  In a Harvard Opinion Research Program poll of 523 parents from 39 U.S. states whose child's school closed temporarily in response to the 2009 H1N1 pandemic, 90% of parents agreed with the dismissal decision, and 85% believed the dismissal reduced influenza transmission. Further, a total of 75% of parents who responded stated that the dismissal was not a problem, and only 3% stated it was a major problem. Approximately 20% of parents reported that an adult in the household missed work because of the dismissal, and 19% had a child who missed a free or reduced-cost lunch. Of these, 2% and <1% respectively, said missing work and missing lunch were major problems. Despite these small numbers, if you are one of those families, 100% of your family has a major problem.  We have a comprehensive plan to help those families.

Dramatic flattening of the curve is not only dependent on thoughtful public policy focused on early interventions to increase social distancing.  Every New Mexican can make a difference. A randomized trial in Egypt during the 2009 H1N1 pandemic showed a 47% reduction in influenza after twice daily hand washing and health hygiene instruction. And don't fret if the hand sanitizer is sold out at your grocery store. Plain soap and water work just fine.

The other important message for all New Mexicans is that the decisive policy decisions that have been made in the past week only work with full public cooperation.  If schools close, but high school students all congregate in the nearby park every day, or there are any crowded rooms in our state, the evidence-based benefits of social distancing will not occur.  So, stay at home.  Maybe pull out some board games.  Talk to each other.

To protect our medical delivery system, unless you have significant shortness of breath or other serious symptoms (in which case you may need to call 911), start by dialing 855-600-3453.  And like us, check the Department of Health website at http://cv.nmhealth.org every day, which has the latest information on coronavirus in our state.

Finally, we would both be remiss were we not to acknowledge the incredible outpouring of support and offers for help that have come in the hundreds of phone calls and text messages we have each received during this challenging week from every part of our State.  From police officers volunteering to help with child care, to a major NM reference lab bringing up expanded COVID-19 testing capacity, and private sector healthcare organizations and the Indian Health Service implementing drive thru COVID-19 evaluation clinics, to two managed care organizations and a university stepping up to support a public call center, to kind and encouraging daily messages from our friends near home and colleagues around the world, there is an emotional depth of gratitude for this amazing commitment of New Mexicans that our words cannot express.  And don't get us started on the hard work of every state employee.

Every family has a role to play to "flatten the curve," New Mexico style.  Thousands of lives hang in the balance.  We can't just block off all roads into our state like Gunnison did over 100 years ago.  But given everything that we have accomplished together over the past week, we believe that New Mexico is now one of the very safest places to weather the global pandemic.  We are ahead of the curve we are trying to flatten, the best place we can be.

Wash your hands with soap and water at least twice a day. Stay at home. Help your neighbors. Love each other.