“Imagine that you wake up tomorrow and look in the mirror and see a male face,” self-taught local painter Steven Snyder says, creating a scenario to help me understand her perspective, “but you don’t want to be male and you don’t want to be seen as male. What do you do to change that?”
In 2015, at 66 years old, Snyder moved to Santa Fe from Denver, Colorado, for a fresh start. After she ended a 30-year marriage, left the real estate business and transitioned to the Southwest, Snyder also began the transition from male to female. She documented this process through a series of painted portraits created from 2015 to 2017.

This series of 22 works makes up About Face: The Journey to Female at 7 Arts Gallery, an art space that opened its doors on Lincoln Avenue in April 2017 thanks to a team of—get this—seven artists who wanted a collaborative studio with a public interface. The original seven (now five) split overhead costs in order for artists to keep 100 percent of their sales, though Snyder says she plans to donate 15 percent of her profits to local nonprofit Girls, Inc.

In 2017, the works on view were primarily created by the founding artists (Angel Wynn, Tom McGee, Dayna Fisk-Williams, Cecilia Robertson and Karen Waters), but the group collectively decided to create opportunities for other local creatives through a series of monthly exhibitions in 2018. “It keeps us moving,” Wynn explains. “It’s all about energy. New artists bring new people. It’s a win-win for everybody.”
Snyder is the selected artist for the month of January and Wynn shares how her art is a change in perspective for the gallery as well; Snyder’s mixed-media materials, transgender focus and colorful aesthetic differ from the work 7 Arts showed in 2017, which included landscape paintings and fiber arts.

Not only is About Face the first show of the new year, but it is the first time these intimately personal works are exposed to the public eye. In this act of vulnerability, Snyder believes viewers will question how we define “gender” and “normal” because, she says, “The word normal has no meaning when it comes to people—there is no such thing as normal. It’s a term some people think defines the masses, but it doesn’t.”

Snyder layers her personal story into these mixed media paintings by collaging her used makeup pads and imagery from women’s style magazines of the ’50s, ’60s and ’70s. She describes how her transition to female began with the application of makeup every single day, which then led her to purge all of the male clothing in her closet to build a new wardrobe of women’s fashion. Her process mirrors this journey, revealing parallels between creating her art and her self. “There’s such a strong correlation between my actual painting of my face on a daily basis with makeup and what I’m painting on these surfaces,” she says.

Such surfaces are often reclaimed wood with knots that Snyder repurposes into the eyes of her portraits. Wide eyes appear on each face in the series and emit a sense of power that pleads with viewers to be fully witnessed. The surrounding colors Snyder applies are abrasive and garish tones that scream out with an honest story that asks to be heard.

In “So New to the City,” a painting from the series, a floating hairless face stares with blank eyes that have the faintest hint of an iris and pupil, but are overshadowed by a sea of sclera surrounded by pink and purple eyeliner. It is unclear if the subject is male or female, but that no longer seems to matter as the seemingly empty gaze commands attention and stares openly out at unknowns with trepidation and courage.

Snyder shares that this was the first painting she created when she moved to Santa Fe in 2015 when she was “just gazing out, wondering what lies ahead in this new life of being single, changing genders, moving to a new city, and really beginning to paint full-time.”

About Face blurs the line between male and female in androgynous images that leave viewers questioning not only who they are seeing, but also why we assign the labels that we do. “I’m looking forward to the day when the labels are gone,” Snyder tells SFR. “We’re all just people and it really doesn’t matter how we look.” 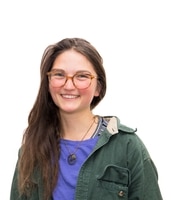