When I walked in, I had the distinct sensation that I was on the set—or even inside—a David Lynch film. Inland Empire came to mind, but after lingering several hours, I still couldn’t place the feeling. Maybe it was the darkness shot through by intense bursts of color, light, recognizable imagery, and abstract patterns that made it all feel just a bit eerie. I was, after all, surrounded on all sides by glowing projections. But even as I looked at an individual work, it was hardly without seeing the light of others flickering on the periphery. This was because with 12 artists’ projections and four performances, almost all available surfaces—the walls, the ceiling, the floor and alcoves throughout the building—were engaged. Spectators dispersed and accumulated, their silhouettes hovering across the walls, as power cords snaked in every direction.

This was NO SIGNAL, one venue in the Bring Your Own Beamer (BYOB) circuit, which began in 2010 in just six cities throughout the world. Since then it has expanded and contracted—there are currently 16 cities hosting BYOB events this year, with Santa Fe making its debut. Across all the venues, the basic premise of the event has remained true: a free one-night event of video and performance where artists provide their own projectors and media. This particular instantiation included LED, overhead and slide projectors, with two analog televisions rounding everything out.

I remember very clearly the sound of a knife chopping as onions sautéed on a camping stove in the middle of the warehouse. Two artists, Autumn Chacon and Liz McKenzie, who make up Black Snake Killaz, made stew as part of a sound performance. Each gesture generated a new acoustic. As I later ladled the fruits of their performance-art labor into a bowl, I realized the core ingredient was Spam. They mentioned that the meat product was a necessary commodity at the occupation of Standing Rock.

Elsewhere, the artist Sarah Canelas was near-motionless, lying on her stomach, elbows propping up her chin, while staring blankly at a snowy television screen plugged in near a lounge chair. The setting could have been grafted from your neighbor’s sitting room, it seemed so familiar. It was uncanny, moreover, to watch others as they watched her; a few became so transfixed they even walked into the screen door that separated the alcove where she lay from the outside. Brenda Castro’s installation in an adjacent space had the visual effect of floating blazes of fire with prismatic flares of red emanating across the walls.

NO SIGNAL was a student-run event that got a lot of social media hype in the weeks leading up to the big day (which was Friday Oct. 20). Yvette Serrano, a senior graphic design student at Santa Fe University of Art and Design, and Treston Chee, a studio arts major with an emphasis in photography and digital arts at the Institute of American Indian Arts, led the charge, organizing the event since the late summer. They did it with the help of Bill Mitchell, a Santa Fe-based experimental cinematographer who helped in finding the location—an expansive warehouse space off Rufina Street.

Serrano first became aware of BYOB when living in Denver and thought hosting it for the first time in Santa Fe would be feasible. “I was drawn to this idea that anyone could host this type of event. … I wanted to allow anyone to show their work. Most events are curated, but we didn’t want to do that. It was nice to see students show their work along with teachers.”

In Chee’s estimation, “Bringing a show like NO SIGNAL to the Southside of Santa Fe gives opportunity to potential young artists.” Both organizers have a vision for continuing the event in the future, possibly as an annual event. 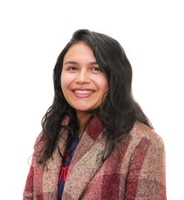 Alicia Inez Guzmán grew up in Truchas and currently lives in Santa Fe. She writes about cultural workers, chicanx and indigenous histories of land use, and contemporary art.